A Brief Timeline of Computer Programming and Its Possible Future 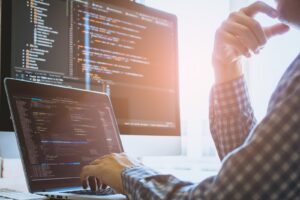 These days, it seems like everyone is talking about computer programming, language, and coding. It almost seems as if the hype surrounding programming was an overnight kind of thing, but that’s not the case at all. Now more than ever, there has been a surplus of programs, classes, and tutorials designed to help aspiring coders. We’re here to go over how computer programming came to be and how it plays an integral role in our lives and for the future.

The History of Programming

1883—the Algorithm for the Analytical Engine

This algorithm was created by Ada Lovelace for Charles Babbage’s Analytical Engine to compute Bernoulli numbers. Not only is Lovelace considered the world’s first-ever computer programmer but the programming language ”Ada” is named after her honor.

Created by Navy Admiral Grace Murry Hopper as a computer programming language that could run on all brands and types of computers, COBOL stands for Common Business Oriented Language. This language is commonly used in ATMs, credit card processing, telephone systems, hospital and government computers, automotive systems, and traffic signals.

Developed by Dennis Ritchie at Bell Labs, C is considered by many to be the first high-level language. A high-level computer programming language is closer to human language and more removed from the machine code. C was created with the intent that operating systems could be used on a wide spectrum of computers. It has influenced the creation of many other languages including Ruby, Java, JavaScript, Perl, PHP, and Python.

The Introduction of SQL

SQL was developed by Donald D. Chamberlin and Raymond F. Boyce at IBM. SQL stands for Structured Query Language. It is used for viewing and changing information that is stored in databases. SQL utilizes command sentences called queries to add, remove, or view data.

2003— Concise and High-Level Language of Scala

Go is a programming language designed by Google to address problems that may occur in large software systems. Since computer and technology use is much different today as opposed to when languages such as C++, Java, and Python were predominantly used, problems arose when large computer systems become more prevalent in business and working settings. Go is intended to improve the working environment for programmers so that they could write, read, and maintain large software systems more efficiently.

Swift is a computer programming language developed by Apple as a replacement for C, C++, and Objective-C. Swift is supposed to be more efficient to use and allows less for mistakes. It is versatile and is used for desktop apps, mobile apps, and cloud services.

New technologies running on revolutionary new programs are constantly being produced and marketed to citizens across the globe, which also means that programmers always have something new to learn. Programmers predict that new voice-activated applications will take the lead in computer programming. New and updated voice-activated applications can enable consumers to gain information and interact more, virtually, through a website, and in many other ways.

Mobile development is also predicted to be demanded in terms of computer programming. Web technology is growing at a rapid rate. Consumers are more interested in online shopping, research, and more, which calls for online automation. These are huge changes that are going to continue as they tend to make the everyday tasks of consumers and business personnel much easier.

Learn More About the Intricacies of Programming with Marble Computer

Marble Computer is comprised of a team of professional and experienced coders and programmers. We retain all the knowledge customers might need when discovering the endless capabilities of computer language and programs. Contact us today to learn more about what goes into computer programming and how it can make a difference in your work life and more.